We have a ROE Diamond 2.6 LED video wall system with Brompton Tessera SX40 processors and fibre XD distribution system. This is a small pitch/high resolution modular LED video wall system that can be ground stacked or flown. The lightweight panels are 500mm x 500mm, and each panel has 4 easy to change LED modules. That’s 192 pixels by 192 pixels per LED panel. Panels can be assembled into any configuration in dimensions of 500mm. The LED pixel pitch is 2.6mm which allows for a high definition video wall display. The maximum brightness is 1500 nits (in plain language this could be described as very bright), but can be turned down incrementally to suit the environment. Our ROE video wall is based in Edinburgh but can be used anywhere. We have partner companies across the UK with matching LED video wall modules in the unlikely event that additional coverage is required – we have enough LED video wall for Scotland’s large venue, The Hydro.

The ROE Diamond 2.6mm is an easy-to-stack or hang LED video wall solution that can be used in flat or curved configurations. It is designed for indoor use only and provides and high quality but cost-effective LED display solution for temporary event rental.

The ROE Diamond 2.6 system is more expensive than many comparable LED video wall systems but the lightweight, compact and ultra-durable magnesium alloy mean that the reduced transport costs and ease of assembly (saving time and crew costs) result in an overall saving when deployed at an event.

The system is driven by the Brompton Tessera SX40 video wall processor which takes the input signal and splits it across the XD fibre distribution system which deliverers the content to the LED panel modules. Again the ease of use of the Brompton system delivers time savings when it comes to setup. Panel firmware can be updated from the processor.

Wiring can be configured in a fully flexible way to enable high quality signal delivery, and full signal redundancy can be built-in to your system design (requires a backup processors, redundant XD distribution boxes and looped cabling).

LED video wall at The Steamie, in the Hydro (SEC Glasgow). 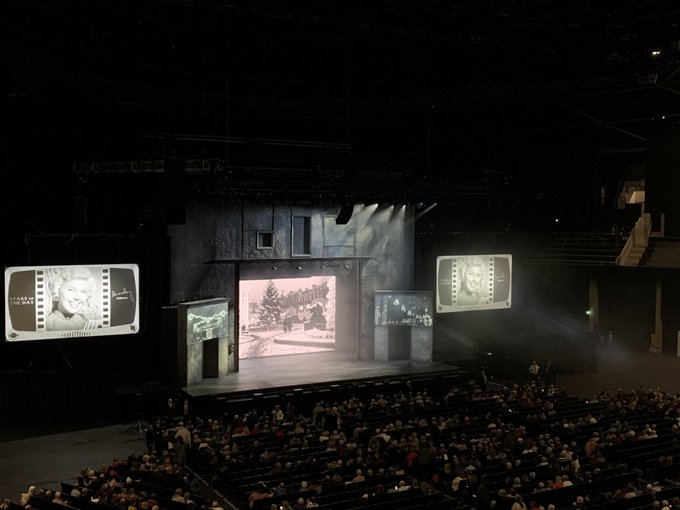 AV designer Ryan Dewar designed an immersive video production with video backdrops that set the scene from the moment the house opened and throughout the show. The content was displayed on a 240 panel Roe Diamond 2.6 LED screen on Kinetic truss at the rear of the stage plus a pair of projections onto the Left and Right of the set using Panasonic RZ21k units. Video was played back on a fully redundant Qlab system Network synced with the MDs system with one output @ 3840/2304 feeding the Brompton Sx40 processors and two HD outputs feeding the projectors.

Signal was sent around the vast venue using a combination of Fibre and SDI as appropriate and the screen was fed by just 2 fibre runs to a pair of Brompton XD units, with a redundant pair meaning that everything from the computer to the screen were fully redundant.

In addition 4 manned Panasonic HPX371 cameras plus 3 Static cameras were mixed via a Atem 4k switcher feeding a pair of 7.5m Av Stumfl screens from Panasonic Rz31k Projectors so that every seat in the house had a great view of the action. 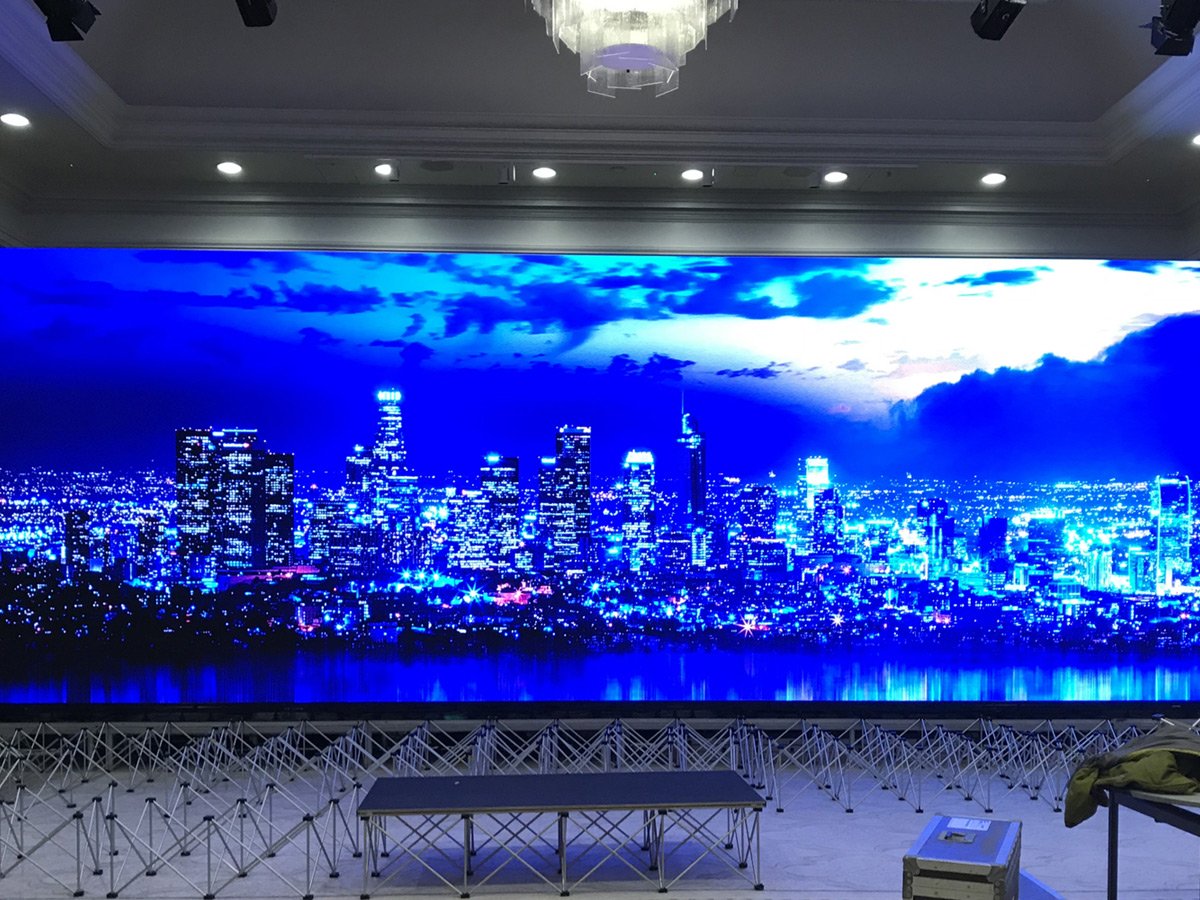 This was a 10.5m wide, 147 panel LED video wall setup for a corporate event in Scotland, which was used to provide a stage backdrop cable of displaying any video input or inputs. This could be corporate wallpaper, or PIP, large scale zoom meetings, presentations, video playback or any combination thereof.

The system was fed by our Brompton SX40 video wall processor which interprets a 12g SDI or 4k HDMI input signal and sends it the individual LED panels that make up the wall.

As this event was in a low ceiling room without existing truss and the LED wall height was relatively low we ground stacked the LED system.

LED video wall at The Barrowland Ballroom in Glasgow, for Primal Scream. 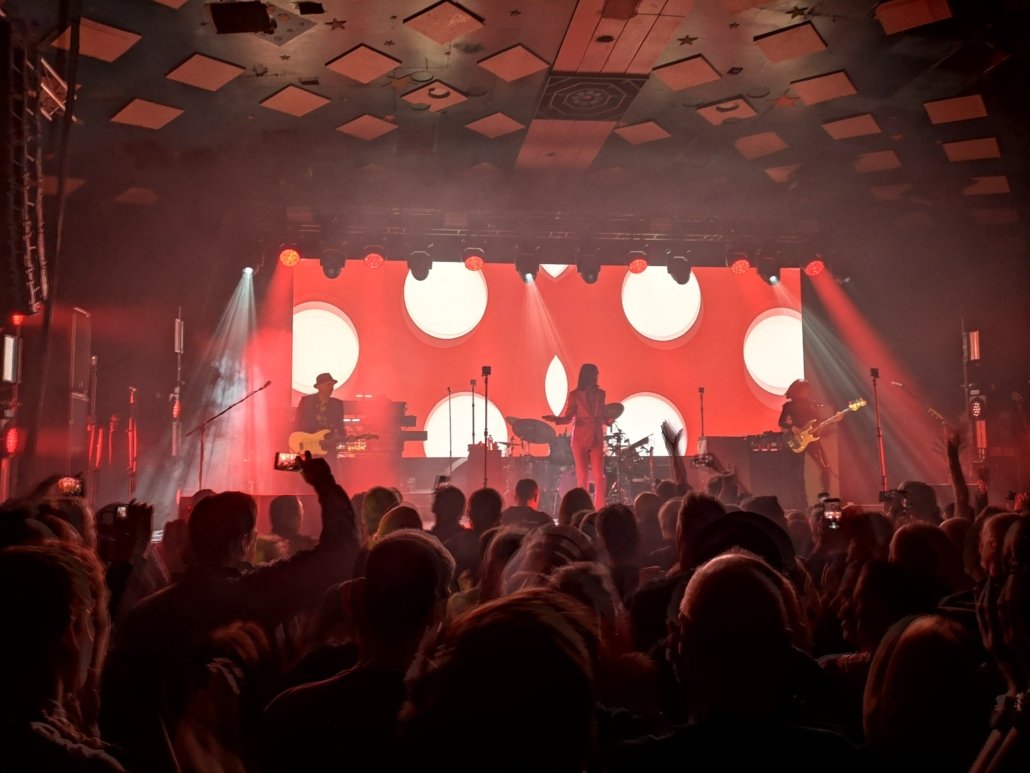 Video Wall Backdrop at a Primal Scream concert in The Barrowlands.

We provided an 8m x 3m video wall that sat on the back of the stage.

The venue has a relatively low ceiling height at the sides of the stage due to the arched ceiling that restrict options for large screens so this video wall was the optimal size.

We also provided a Catalyst media server operator who used the bands show content and played it back from front of house position.

The signal was fed into the Brompton processor (located at FOH position) which takes care of the signal distribution and sends it onwards to the LED panels, initially via the ROE high capacity fibre system. This allows for a relatively easy cable run from the processor to the LED video wall itself – a signal fibre run is all that is required, with an option for a second line to provide redundancy.